This office building is the first stage of a larger commercial development on the edge of the Port Macquarie CBD. The building is book ended between curved end blade walls and has large roof overhangs and sun screening. 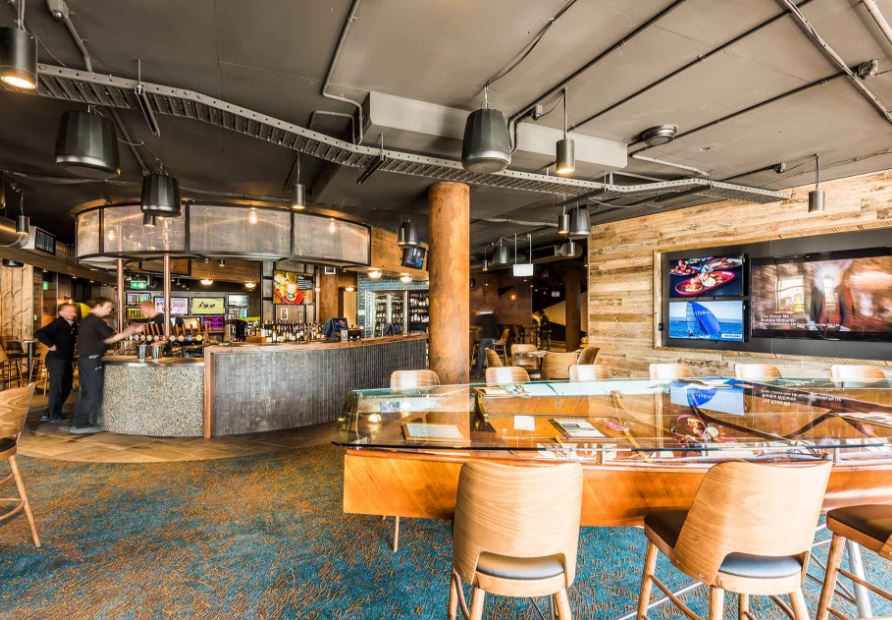 The ‘Boat Shed’ as the name implies was originally a large boat storage area attached to the side of the Belmont 16 foot sailing club. The overall 1000 sqm open floor design includes a sports lounge with a central bar, TAB facilities, a snooker room, outdoor gaming lounge, a dedicated kitchen serving the main floor area and dining terrace looking over Lake Macquarie.

The design of the building services required detailed and thorough coordination with the Architects to allow the installation of all the services to fit within the existing structure while still being able to achieve the features the aesthetics required The Air conditioning was the most difficult design to suit the existing structure and constraints. The end solution is almost a seamless integration of the required services into the complex and creative Architectural design. This project involved the comprehensive renovation and addition of 2 levels to a 1960’s office building originally built for Eagle Insurance.

The clients brief was for a building and fitout that would be representative of the level of finish that guests would experience on one of their tour packages, as well as to provide a high level of amenity to their staff. The new facility, Battlesticks at Scratchleys, operates as a semi-independent Tapas Bar alongside the existing Scratchleys a-la-carte dining room.

The over-the-water location celebrates the city’s best views of the working harbour, and the marine micro-climate is utilised in cooling the building, with no air-conditioning required. The construction works cleverly bridged between the foreshore and a former sea-plane loading platform, requiring no new sea piles or impact on the harbour. Dramatic angled sun-shading blades on the western facade of the building protect patrons from the harsh setting summer sun, whilst still providing views to Dyke Point and shipping activity to the north-west. At night the blades become a welcoming beacon, a striking addition to the foreshore walkway.

The design of Battlesticks at Scratchleys began with careful site analysis, identifying the area as a historical place of food gathering for Indigenous Australians, where oysters and shellfish were collected from the harbour embankment. The building now continues to rest as an oyster on the foreshore, providing a good meal for passers-by. Marline are assisting in the complete transformation of the “Doylo”, with a number of stages now complete including new bistro and gaming areas, entry relocation and an expanded alfresco area for dining and entertainment.

Increased lounge and socialisation spaces were introduced by realigning the bistro and gaming room, with unique banquette seating arrangements providing appealing seating selection for patrons. The new servery bench, bar and iconic ceiling in the gaming room provide focal areas and the use of materials such as back-lit bar panels, custom designed Axminster carpets, textured tiles and feature lights create an identity for the club as well as showcase its transformation.

The most recent update to the club is a two-storey addition, utilising an old bowling green site, which offers a new “Active Fitness” gym with an alfresco Smokehouse and craft beer garden above. Bespoke materials such as rich natural timbers, cobble effect floor tiles, industrial style light fittings and leather-look furniture were selected for the smokehouse to create an American aesthetic with timber hardwood ceiling linings in both pavilions dominating the space and adding natural warmth. The double pavilion style is visible from over a kilometre away on the Pacific Highway and serves to counterbalance the soaring porte cochere roof. This project involved the expansion of the existing Newcastle Airport to include a new departure lounge, expanded arrivals area and new administration office area.

Scroll back to top